Deploying Wi-Fi Networks in the Real World with Jason Hintersteiner

Jason Hintersteiner, a Wi-Fi engineer, presented at #WLPC US Phoenix in 2016 about deploying Wi-Fi Networks in the real world, the theory, and practice.

You can watch the full presentation HERE.

Steps in Deploying Wi-Fi in the real world

The first step is admitting you have a problem. I’m going to admit that we are powerless as Wi-Fi engineers to really deploy in the right way. Where does it start? It starts with the customers. They have a lack of understanding of Radio Frequency (RF) and how Wi-Fi works. Most of my customers have lack understanding of how networking works. They got conflicting priorities in aesthetics.

But it’s not just the customers that are our problem, it’s us as well. We’re highly trained people in our craft and we’ve been doing this forever, some of us longer than others. We know better than everybody else, how it’s supposed to be done.

“I’ve certainly worked on a wide variety of cases where certain vendors are more appropriate than other vendors.”

We also have commercial pressure to sell more versus selling what’s right. We also cheat. We take shortcuts especially if we’re not getting paid.

Let’s proceed with the steps that we normally go through. All the books and the CWNA have written and told us how we should do design and how we should deploy. 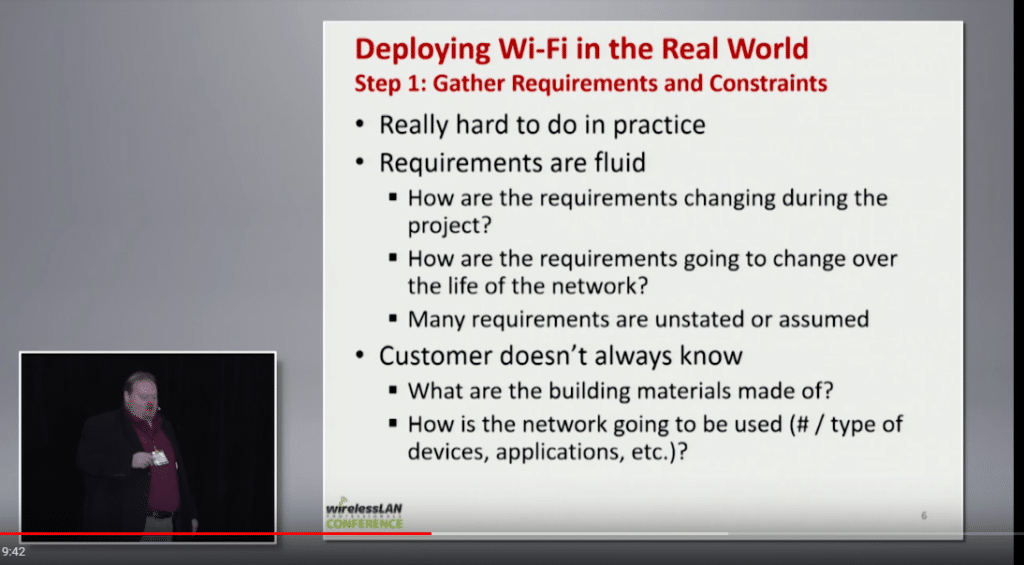 I’m a systems engineer with a background in training, so I’m a huge fan of gathering requirements constraints but this is really hard. They’re not static, they are fluid. The requirements often change during the project.

I don’t know how many of you have worked on surveillance systems, but I have yet to work on a surveillance project where people are mounting cameras. They are “not” increasing the number of cameras while you’re doing the design.

We get to work on one. However, the requirements actually changing over the life of the network. We have networks that are five years out.

Many requirements are unstated or assumed. How many people in their designs make sure that there’s excellent coverage in the bathrooms?

A customer doesn’t always know where the building materials made of. Sometimes, they don’t even know how the network is going to be used, what number and types of devices and what kind of applications.

Predictive modeling is an oversimplification. We oversimplify the environment because we guess the types of walls. We often don’t draw in bathrooms, closets and other kinds of small features. We’re guessing it is the absorption and reflectivity on each band. We don’t account for things in the actual environment like furniture, appliances, mirrors, and big bags of water walking around.

What about external interference? You can’t do that in a predictor model. We also oversimplify our deployment constraints. Can wiring actually be run to where we plop down those APs on the model? Will the installer actually deploy based on your specs?

We don’t want to rely on only one when we want to perform a site survey. We want to go to the site and take measurements, measure the RF through walls.

This isn’t commonly done especially in the small-medium business because the survey doesn’t happen if nobody wants to pay for it.

When they do a walkthrough, it’s often to discover basics. Where can I actually run cable not how the RF is gonna propagate?

Deploying to spec. Does the Installer cut corners and move your APs? I’ve heard several instances of that. Does the installer actually follow your carefully planned channel and transmit power scheme when they configure the equipment?

Cabling. Can wiring be run or is your cable actually validated? Are your connectors properly seated?

Your environment. Has it changed since the design or the survey was done?

Let’s go back in and validate and assess where we are. Unfortunately, this isn’t commonly done. It won’t get done if nobody pays for it. Often they’re in a rush to finish the job, especially on a new construction where the constructions already delayed and now they’re piling in the Wi-Fi at the very last minute.

Installer limitations. Are the tools available and do they know how to use them? And when they do any testing for basics, can I get out to the Internet? Do I actually have just any coverage at all? In certain sections, it’s a spot check, it’s not rigorous. If there is a problem what are they doing about it?

What can we do as Wi-Fi engineers? You just place the APs randomly and let RRM just figure it all out for us. We could blame it on those ill-defined multi-user MIMO algorithms.

Better yet, we’ll just wait until 802.11ax comes out and retire to @wirednot’s farm to go after a simpler life. Let’s not do any of those things.

What do we do? We do the best we can. We standardized as much as possible. We pick out our set of preferred equipment, our APs, switches, routers, and controllers for particular applications. Then we have to be flexible and actually adapt them to whatever requirements we actually know about.

We’ll also try to build a robust design. We designed those unstated requirements and follow best practices. We build margin and excess capacity. We also keep learning and refining our craft which is why conferences like this are great.

Failure is not an option.

As a field engineer, I’ve got to figure out how to make it work even with the lack of requirements, a lack of data and a lack of survey stuff. Installers who are in way over their heads, I deal with these stuff on a day to day basis.

But failure is not an option. So, we have to figure out how to make it work despite all of those things.

Gods of Wi-Fi grant me the serenity to accept the things I cannot change: lack of requirements, lack of budget, lack of time.
The courage to change the things I can: following best practices, following standards, following a robust design principle and the wisdom to know the difference. Also, the list of not to slap the customer across the face.

Jason Hintersteiner is the Director of Business Development at LigoWave. He is a Certified Wireless Network Expert (CWNE #171) and a Networking & Wi-Fi Expert. If you have more questions or feedback, connect with Jason via twitter.

Go HERE to watch to this entire presentation.