Twitter is… that’s a hard question. And for people who haven’t tried it the reaction is usually the same. “So what’s the big deal?” – in fact, I was in that very boat not too long ago. I opened up a Twitter account… looked around, then did nothing with it.

A couple of weeks ago I again started and this time I finally ‘Got It‘ and have my software called ‘Tweetdeck’ on my Macintosh running in startup mode and it’s always on.

It is a way to stay in touch, learn about new things, and socially network. Sometimes the ‘tweets’ are boring, useless, or offensive. But it’s a new way for me to keep a finger on the pulse of my industry. I also use it to ‘watch’ the BYU Lacrosse games I can’t get to. Some of the folks watching the game send a stream of ‘tweets’ letting all of us who ‘follow’ the @BYULax account to follow along with the games.

I use a program called ‘Tweetie’ on my iPhone rather than have the tweets come in via text messages. 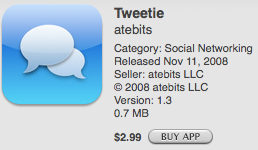 Or on my Mac it is Tweetdeck.

I’m at http://twitter.com/keithparsons – I’d love to have more Followers!

Here’s a video that might help as well.
http://www.youtube.com/watch?v=ddO9idmax0o

From Wikipedia.
Twitter is a free social networking and micro-blogging service that enables its users to send and read other users’ updates known as tweets. Tweets are text-based posts of up to 140 characters in length which are displayed on the user’s profile page and delivered to other users who have subscribed to them (known as followers). Senders can restrict delivery to those in their circle of friends or, by default, allow anybody to access them. Users can send and receive tweets via the Twitter website, Short Message Service (SMS) or applications such as Tweetie, Twitterrific, Twitterfon, TweetDeck and feedalizr. The service is free to use over the Internet, but using SMS may incur phone service provider fees.