How To Deploy WLAN Infrastructure to Every Public School In Uruguay

What would you do If you had to hand out an internet ready laptop to every child, in every school, in your state? And how would you ensure every classroom, and every school, that didn’t previously have a reliable or an existing wireless network, could handle all these new clients? 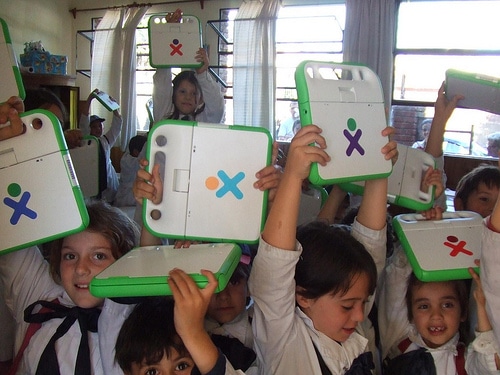 This was the challenge faced by Ignacio Sánchez and his team from Plan CEIBAL.

“Plan CEIBAL initiated by President Vázquez, was launched in 2007 with the vision of providing every grade school student and teacher in Uruguay with a laptop connected to the internet.”

The question that we asked ourselves was:
“How can we perform inside, high density Wi-Fi testing with accurate results?”

Testing high density Wi-Fi networks is a challenging task because the conventional way to do this takes a lot of time and a lot of human resources. We needed a low-cost solution and a portable solution in order to move it to each educational center.

We needed a different solution, a different option to carry a lot of laptops to each school.

In the market there are some available solutions but they didn’t quite satisfy our needs.

Why? Expensive lab solutions don’t reflect the real performance of our devices. Because antennas and radios of those tools are different from the ones in our devices.

Cheaper solutions shared the same problems with the expensive ones. We just couldn’t recreate exactly the same environment required for accurate testing.

So we decided we were going to have to develop our own solution to measure the performance of our devices in our network. That was our main goal.

After a lot of hard work and trial and error we came up with our solution: “The Emulator”. The device that enabled us to solve our problems. 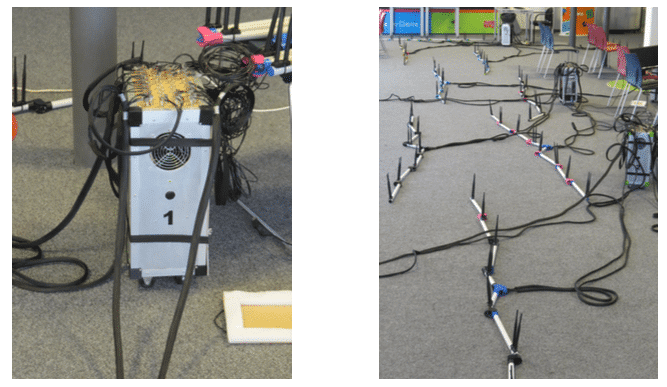 The emulator uses the following components:

Those radios are the main component of the emulator because they are the same radios as the one in our devices.

When we take measurements we need to reach similar results as the one we will get by using all the devices but without having to use a lot of human resources and a lot of laptops in the schools. 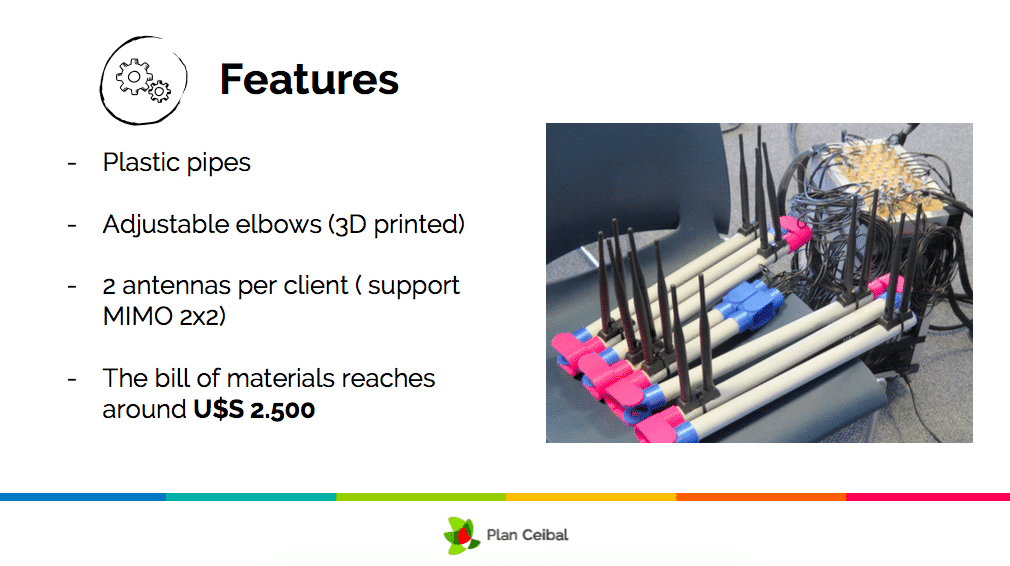 Above you can see some particular features about the the emulator.

But why did we decide to do it like this?

We wanted to recreate the same situation as a classroom setting in which one computer will always be next to another. That is the reason why we recreated the space between the antennas.

We also used easy to plug and unplug QMA connectors to avoid the need to use any other tools that would slow the process down.

We used adjustable elbows because we need to be able to move this tool to each educational center.

We believe that the core part of all of this is the the validation test. Why? Because if it doesn’t work it doesn’t make sense.

This diagram shows the architecture of the network when we did the validation test. 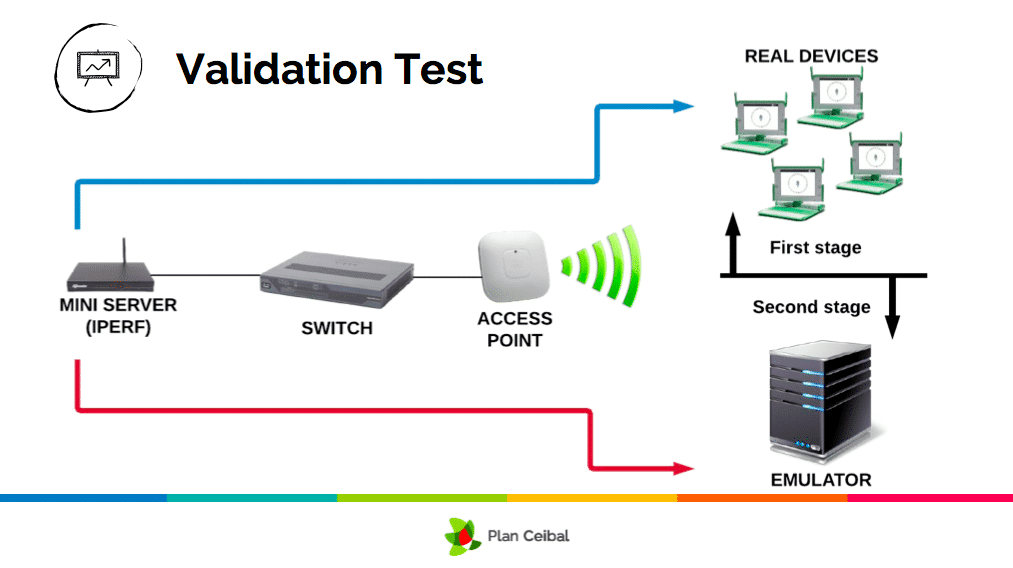 In this test we compared the results of the measurements of the performance of the real situation versus the emulator.

Here is a picture of the validation test that took place in the Plan Ceibal premises in Uruguay. 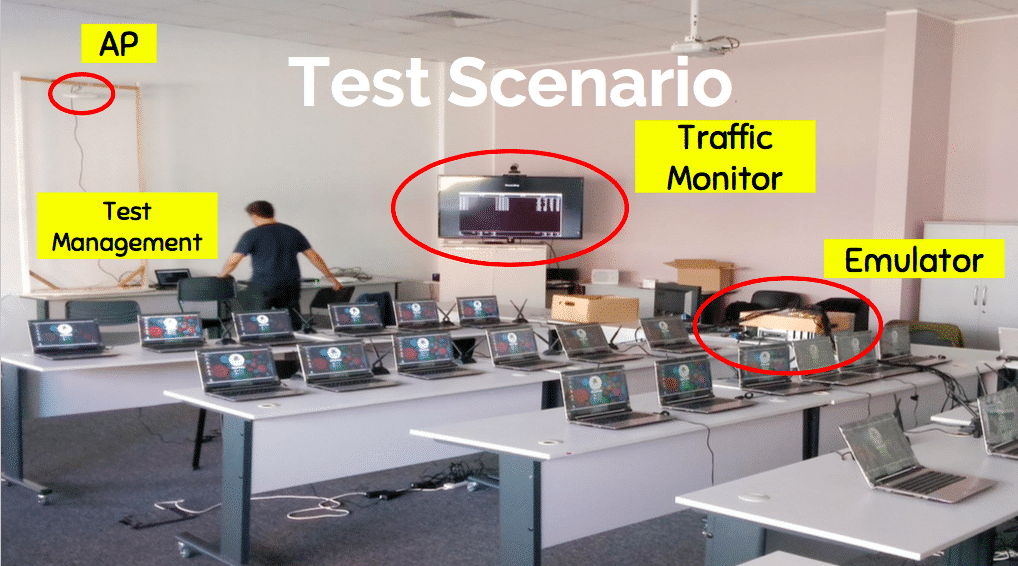 As you can see, there are no adjustable elbows and no plastic pipes. This is because this test was done in a previous stage before we quite had it all figured out. But if you look closely you can see two antennas next to each computer.

You can see the emulator, the traffic monitor, the access point, and test management .

We also took some measurements of traffic captures and RF monitor 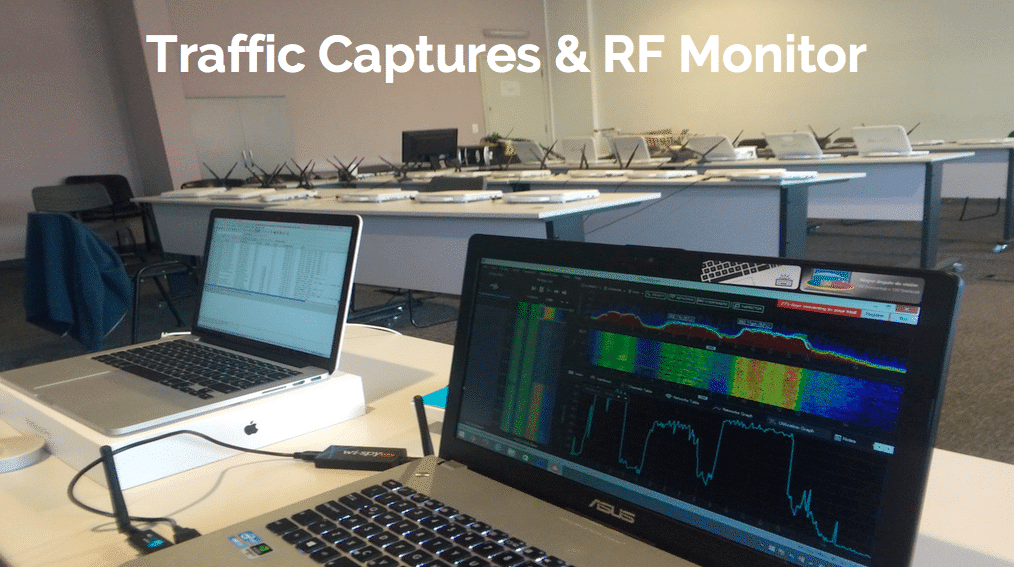 The first one is TCP Throughput per client (Mbps) and the second one is Airtime Usage per client (%).

We discovered the results were similar so we concluded the emulator works.

The Emulator In Action

Examples of the Emulator results
The first time that we took the emulator to the field was to the public school “number 39”. 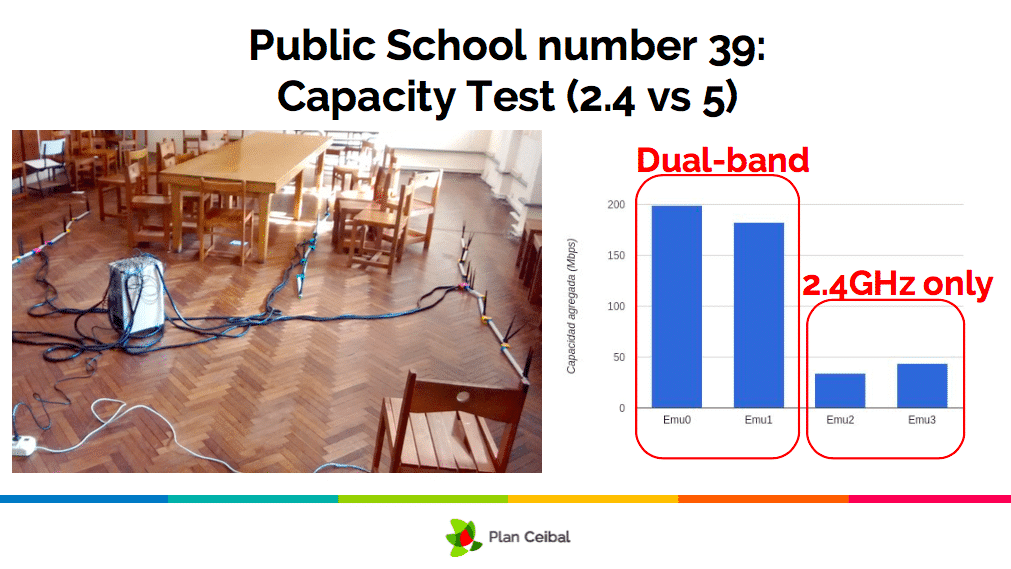 We wanted to compare the capacity of the WLAN in both bands.

The results were predictable. Using dual band devices we reached almost 200 megabits per second and using only 2.4 gigahertz we only reach about 50.

The second time that we took the emulator to the field was in the conference room in Plan CEIBAL in Uruguay. The goal of the test was the same and you can see the results here. 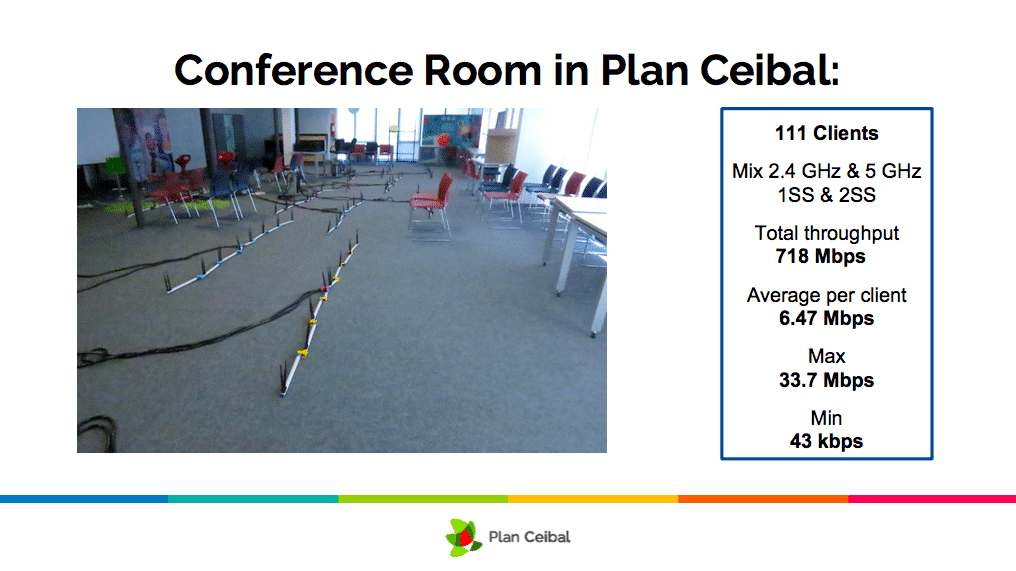 We believe we have developed a novel solution which uses the WiFi chipsets and drivers of students’ laptops, enabling tests which are much closer to real operation.

The actual version supports up to 32 clients, enough for a typical classroom, and it is possible to use several simultaneously. It also provides a software layer which enables application tests such as web browsing, file download, YouTube videos and educational platforms. 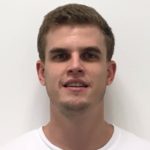 This article is adapted from Ignacio Sanchez’ Presentation at #WLPC

Ignacio has a degree in Telecommunications Engineering from the Catholic University of Uruguay. He has worked with Plan CEIBAL since 2012. During his years in Plan CEIBAL he has gained a lot of experience in WiFi, mainly focused in design, deployment and troubleshooting. Lives in Montevideo, Uruguay.