Dr. Eldad Perahia presented at #WLPC Phoenix in 2018 about looking forward to the next major amendment coming to 802.11 – 11ax.

This post is part 1 of that presentation where he shares the issues leading up to 11ax, the goals the 11ax task group are working at accomplishing, and finally a potential timeline for the amendment.

You can watch the full presentation here. 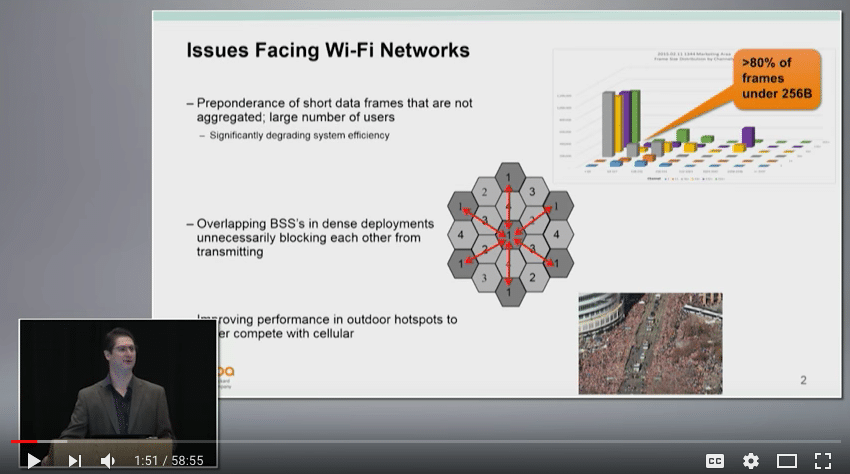 Around 2013 while we were wrapping up 802.11ac we started looking forward to what problems we were facing with existing Wi-Fi networks and what we thought we were going to face in future networks.

We were getting reports that networks were still having a preponderance of short data frames and we weren’t capable of aggregating those frames like we did with 11n and 11ac which was causing a lot of efficiency hit.

We were seeing networks with really dense deployment with overlapping BSS’s. This was impacting potential increase in capacity so we wanted to look at features that perhaps would unlock that capability.

And with the whole discussion of 5G we wanted to be more competitive with outdoor cellular. So there was an aspect of the group that wanted to purposefully address outdoor. 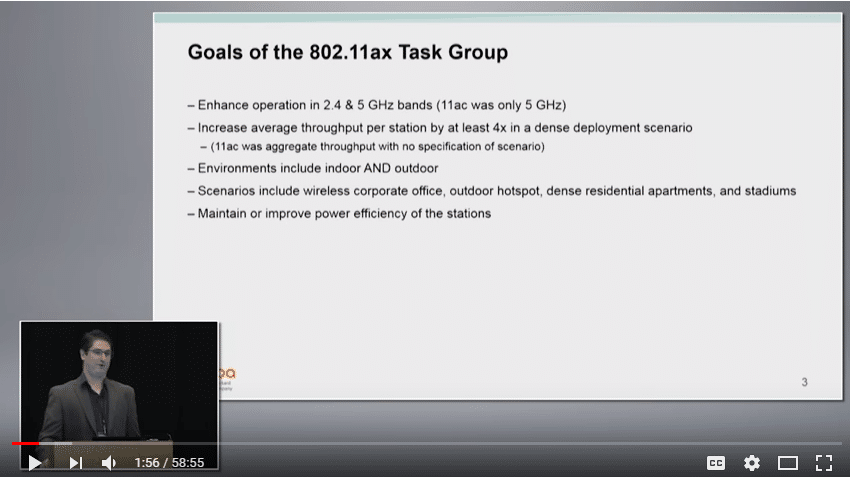 We were going to enhance operation in 2.4 and 5GHz. As we all know, 11ac was only in 5GHz. We haven’t had a major enhancement at 2.4 since 11n so we were going to go back and try to improve 2.4GHz as best as we could. Still the major focus is on 5GHz but we’re not excluding 2.4 this time around.

We’re going to look at environments indoor and outdoor this time.

As usual, with any major amendment we try to improve the power efficiency at the clients. 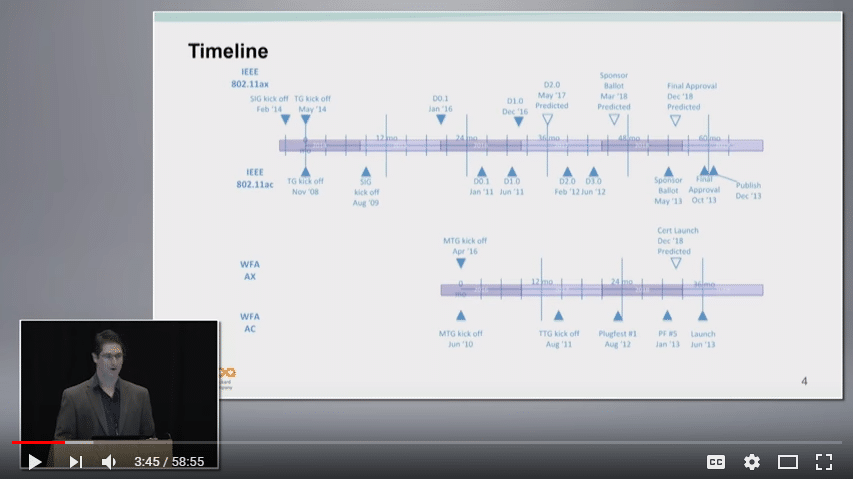 Before I actually get into anything too technical most people ask, “When is this is coming out?” so I’m going to start with the slide of when it’s coming out.

I did two things here

We had the task group kickoff in May 2014. For 11ax we did things a little different. Each amendment 11n and 11ac there was a special interest group who got together and started brainstorming. You can see with 11ac it started well after the starter task group, well this time it started beforehand. But it took them a long time to get to draft .1. So that’s just going to give us an idea of the realistic timelines here.

From .1 to recently 1.0 took them quite a long time. Even though the task group appears to be working in line with the time frame of 11ac, it’s actually taking a lot more time.

That said we’ve seen now for 10 years that when the standard finishes has really little relevance to when the products come out. 11n draft product came out of 2.0 11ac came out of 3.0 so Wi-Fi Alliance is already starting the process of developing a certification plan. Hopefully 2.0 and 3.0 will come out somewhere the first half of 2018 the spec and then we are targeting that we can be certifying in 2018 but probably early 2019.

I’m a little concerned this may slip as well because the number of features are much much larger and so the amount of tests that need to be developed is going to push it to be much longer than a certification development time for 11ac but hopefully somewhere in the first half of 2019.

Note – these transcripts have been edited for clarity.