I’ve been quite pleased with my little Dell Mini 9 – loaded with Apple Macintosh OS X.

The couple of little things that bothered me, namely the smaller keyboard, and the lack of the standard Macintosh two-finger scrolling and two-finger right-click.

Well, this week I did an update to the OS X operating system to the latest 10.5.7. It totally crashed the little guy… until I went online and learned a couple of ‘tricks’ on how to let the software/hardware find itself all over again. Now we’re fine! 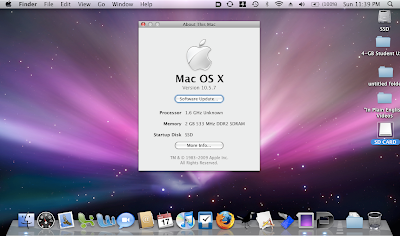 In addition – and to my great surprise – I also found the latest drivers that allowed me to make the little Hackintosh’s trackpad act just like a real Macintosh! I now have two-finger scrolling and two-finger right-clicks working. Yea!

No software is going to make this little keyboard get bigger all of a sudden – so I guess I’m stuck with that.

The little Hackintosh makes a great second computer. I take it on all my trips. I’ve pre-loaded the 64GB Solid State Drive with a bunch of TED Talks, Movies, etc. so it’s a small little lightweight entertainment device for use on the plane.

In addition, it has an SD slot on loaded with even more movies on a 16GB SD card.

This has been a very fun little project!

On her trip to NYC with the High School Fashion Team, my daughter used it as in-flight entertainment, and to check her e-mail and update her facebook page during the trip. (WiFi in the hotel worked great)

Since I’ve got all my ‘important’ stuff like Calendar, Contacts, E-mail, etc. all sync’d to Mobile Me – it was a simple exercise to get the Hackintosh to also sync to Mobile Me. Now it is a nice ‘backup’ laptop if anything happens to the ‘big brother’ (my main machine – the Macbook 13″ Unibody).

And for everyone reading this – Backup your data today!
(a quick message brought to you by our sponsor… Your conscience)

If you’d like your own Dell Mini 9 Hackintosh, just drop me a line and I do my best to help out.

Dell Mini9 Hackintosh *lives* once again. Just had to do a bit of ‘tweaking’. Yea! – Instructions here http://bit.ly/EUes4

Hackintosh is even better than before! Now with 2-finger scrolling, and 2-finger right click! Yea! Instructions here http://bit.ly/oQLpw