Basically, allowing for a massive change in the available spectrum we can access in our Wireless LAN designs and deployments.

As of today, there are no vendors shipping products to work in these new spaces. But within mere months we anticipate the start of players bringing hardware to this new resource.

The FCC is not finished with these frequencies – working on a higher-powered version using AFC in UNII-5 and UNII-7. There are also actions to open up the entire 1,200 MHz of 6GHz spectrum for Very Low Power usages in the future as well. But for now, the Low Power Indoor usages – up to 18dBm across the entire band!

Additionally, there is still work being done to bring to unlicensed the ‘tail’ on the right side of the current 5GHz band – specifically in UNII-4 (at least all by channel 181) – this is still in the works. The attempt at UNII-2b was thwarted – and thus we won’t have a solid contiguous chunk of spectrum from 5GHz to 7GHz… bummer. None-the-less, we have now a HUGE opportunity in this new space.

I’ve been working the past couple of weeks to learn how these new channels will be used, numbered, and how they will fit into our channel plans. So I’ve developed a couple of new graphics to help show our customers what this historic vote yesterday is going to bring to our community.

First up, an overview of the current Unlicensed bands that will be available for users in the United States, thanks to the FCC. (Hopefully, this will lead other regulatory bodies around the world to soon follow suit)

Note some of the specific comparisons in this chart.

You’ll also note, I’ve included a formula you can use to take the channel number and convert it to the center frequency of any channel.

The wavelengths also change across each frequency band. This, in turn, changes the Free Space Loss calculations slightly as you climb the various bands.

We can also compare, visually, the HUGE differences in capacity between these bands!

I also included a ruler and wavelength size graphic.

Additionally, I thought it might be a good time to review in detail the 2.4GHz band, not just used by Wi-Fi (802.11) but other RF technologies share this classic ‘Garbage Band’ that has been shared between all ISM (Industrial Scientific Medical) users for decades.

Note the differences between Wi-Fi, Zigbee, BLE and Bluetooth.

Then finally – I tried to get the entire 6GHz to fit a bit easier on a single graphical page. This adds some of the AFC rules and spaces. Please note the loss of many larger channel options as the current incumbents in UNII-6 and UNII-8 have total precedence over Wi-Fi and thus no wider channels can encroach on their space in this louder, outdoor situations. 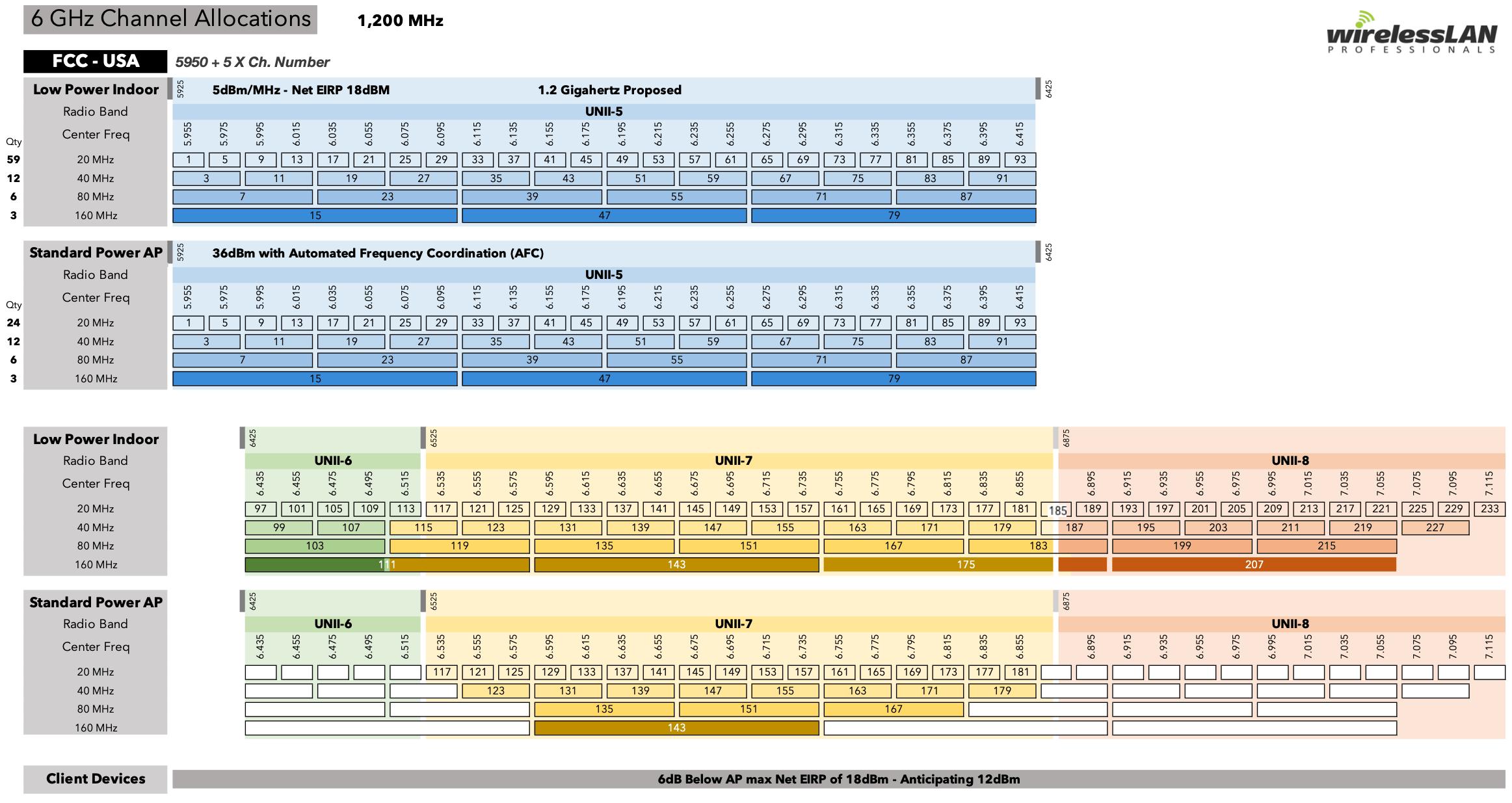 We are still waiting for the entire AFC process to be better defined and the frequency database and access is yet to be determined.

One final note, there will also be another option across the entire 6GHz space for Very Low Powered devices, like A/R headsets and other lower powered situations. All the FCC commissioners noted this was one of their next priorities. So we will hopefully see movement in this space soon.

Additionally, and though this is NOT yet ratified, in the EU, both ETSI and OFCOM are also working to add 6GHz to their respective regulatory bodies. Albeit, because of their own different incumbents, they are only looking at the first 500MHz of space in the UNII-5 band. But even this will basically double the unlicensed spectrum available in the European Union.

Remember, this is NOT ratified – so contact your regulatory bodies in the EU and in other areas of the world to see if you can also gain access to this huge new swath of spectrum for your own Wireless LANs!

We’ve included the ability to download either the above graphics in PNG format, or in PDF format, or you can download a ZIP of all of them combined.

Feel free to use these in your own presentations, please merely give attribution and if possible link back to this post on WLAN Pros website. Here’s a short URL you can copy and paste: www.wlanpros.com/spectrum

If you find any glaring errors, please contact me and we’ll try to quickly fix any mistakes.